Chip Dence and Michael Moore Inducted into Texas Housing Hall of Honor
The Texas Association of Builders inducted a pair of pacesetter members into the Texas Housing Hall of Honor on November 17, 2017. The event was held inside the J.W. Marriott Downtown hotel in Austin, Texas.  Well respected Chip Dence and Michael Moore became the 22nd and 23rd members to appear on the admired Hall of Honor wall.
They have both been instrumental in growing and protecting the Texas residential building industry. Dence has been a driving force in safeguarding the construction codes and standards for the industry. His most valued work has been with the International Code Council (ICC) where he saw firsthand three model code bodies come together to form the ICC. His mission has always been to build safe and affordable houses. Moore’s greatest contribution to the housing industry has been his work with the Government Relations Committee. He’s confident that his ability to work with a wide range of people has assisted in protecting the residential construction industry. Moore worked side-by-side with legislators and lobbyists to get bills passed, or defeated, at the Capitol. 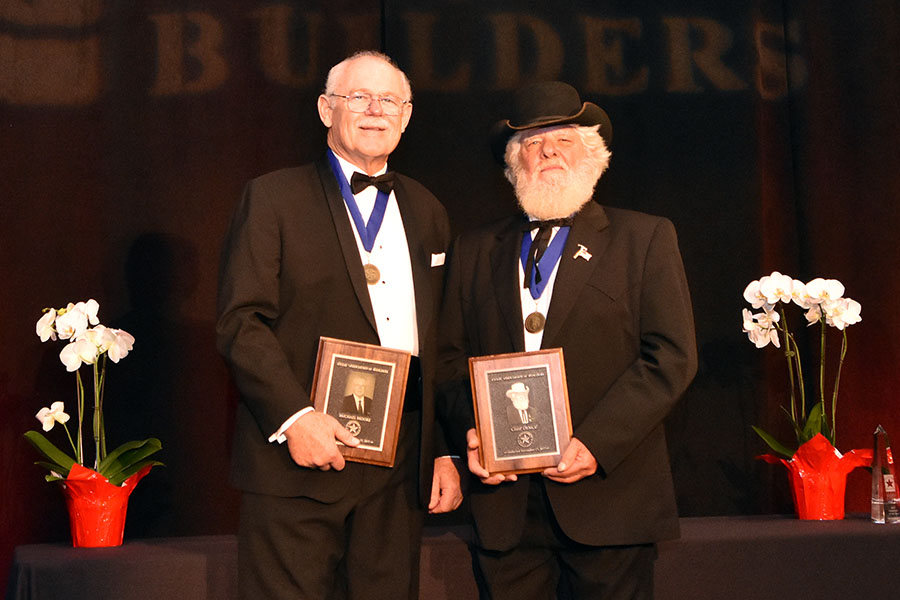 2017 TEXAS HOUSING HALL OF HONOR INDUCTEE:
Chip Dence | Owner/Partner, East End Builders & East End Lumber Company | Victoria, Texas | Builders Association of Victoria
Dence is a builder who comes from a family of stone masons. His career in the construction industry started in 1984 when Chip helped buy his friend’s father’s lumber and construction company. Dence is very active within the Builders Association of Victoria (BAV), Texas Association of Builders (TAB), and National Association of Home Builders (NAHB) since joining in 1984. Within the BA of Victoria, he has recruited over 200 members; has served on the Board for 27 years; was president in 1991, 2000, and 2009; and has been chairman of numerous committees. At TAB, Dence has been a member of the Board for 31 years, regularly testifies during legislative sessions, and serves on various committees, including the Codes and Standards Committee. He has been a HOMEPAC Trustee and a HOMEPAC Gold Key nearly every year of his membership, was Area IV Vice President in 1999, and has been honored as a Life Director since 1998. In 2016, he named the Texas Builders Foundation the beneficiary of his estate. As a member of NAHB, he served as a Director from 1986-1996, a Life Director from 1996-2006, and a Senior Life Director from 2006-present, while serving on NAHB committees. He spearheaded the creation of the Green Building Subcommittee in 2003 and has worked with many federal organizations on housing industry issues.
Dence has also diligently served the housing industry through additional institutions. As a member of the International Code Council (ICC), he has regularly participated in ICC Committee Action Hearings, Public Comment Hearings, and Board meetings and was a member of the ICC IRC Interpretation Committee and the Code Development Committee for six years each. He worked with FEMA as a member of the Coastal Construction Manual Committee, the Rewrite Committee, and the Hazard Mitigation Team after Hurricane Ike.
An active member within his community, Dence served on the Board for the Victoria Regional Museum Association from 2004-2010 and has been Chairman of the Victoria City-County Flood Service Board of Appeals since 2011. He was also the driving force behind a new, free home for a paraplegic man and his wife who lost their home and business in the great floods of 1998.
Dence has been voted the BA of Victoria’s Builder Member of the Year six times. He was named TAB Builder of the Year in 1999 and TAB Remodeler of the Year in 2011, and in 2014, East End Builders was the recipient of the Best Historic Restoration Star Award.
A large-scale accomplishment he has experienced as co-owner of East End Builders is the quality of the homes they produce. Not one of the 280+ homes they’ve built over the last 30 years in the Victoria area has reported damage in the wake of Hurricane Harvey.
2017 TEXAS HOUSING HALL OF HONOR INDUCTEE:
Michael Moore |  Owner/Partner, Ironstone Development | San Antonio, Texas | Greater San Antonio Builders Association
Moore began a successful and enduring career in the home building profession in 1983, and has worked for Gemcraft Homes, Rayco, a division of Ellison industries, and KB Home. He became owner of Ironstone Development in 2002 and partner/VP of XL Land Development in 2003.
In addition to running a business, Moore has dedicated his time to his local, state, and national associations. At Greater San Antonio Builders Association (GSABA), he has been a Board Member since 1990, was part of the Executive Leadership from 2004-2010 and from 2015-2017, and was President in 2008. Within the Texas Association of Builders (TAB), he has served on many committees and has chaired the City/County Task Force, Government Relations Committee, and Legal Affairs Committee. He has been on the Board since 1997, was Area IV Vice President from 2001-2003, has served four terms on the Executive Committee, has been a HOMEPAC Trustee since 2010, and is a Life Director. Michael has served on the National Association of Home Builders (NAHB) Board since 2006 and has been a BUILD-PAC Trustee since 2010.
Within his community, Moore has been involved in at least 20 committees, including the San Antonio Master Plan Advisory Committee and the Military Transformation Task Force. Most importantly, Michael has been involved in the Real Estate Council of San Antonio (RECSA), where he has been active since 1998. Within RECSA, Michael was on the President’s Council from 1998-2002, the Executive Committee from 2010-2017, and was President in 2013. He’s proud to be the only person who has been President of both GSABA and RECSA.
Michael’s greatest contribution to the housing industry has been his work with TAB’s Government Relations Committee and RECSA. Being a part of both organizations allowed him to act as a resource for both. Moore was named GSABA Builder of the Year in 2001, TAB Developer of the Year in 2003, RECSA Phillip Barshop Founders Award in 2010, and GSABA James I. Campbell Lifetime Achievement Award in 2013. He is the only recipient of both the Barshop and Campbell awards.
News