Award Winners/Senior Officers Press Release (PDF)
The Texas Association of Builders (TAB) swore in its 2019 President, Robert Wood, inducted Patsy Smith and George Lewis into the Texas Housing Hall of Honor and handed out six “Of the Year” awards at the prestigious 2018 Excellence in Leadership Dinner on November 15. The 2019 Board of Directors and TAB’s Senior Officers were installed at the Board of Directors meeting the following day.

The office of President of the Texas Association of Builders is one that carries the highest honor, as well as the greatest responsibility. The President’s duties require commitment, energy, enthusiasm, and a willingness to expand ones leadership abilities.  The senior officers are the core leaders of TAB. They are charged with upholding the bylaws and policies of the association.

The Board of Directors are responsible for the member programs, representations, and education of the association. The role of the directors is to develop relationships for the betterment of the homebuilding industry, be an active participant and to set the pace for the rest of the membership.
The “Of the Year” awards are given annually to recognize exemplary service and leadership contributions to the homebuilding industry by its members. 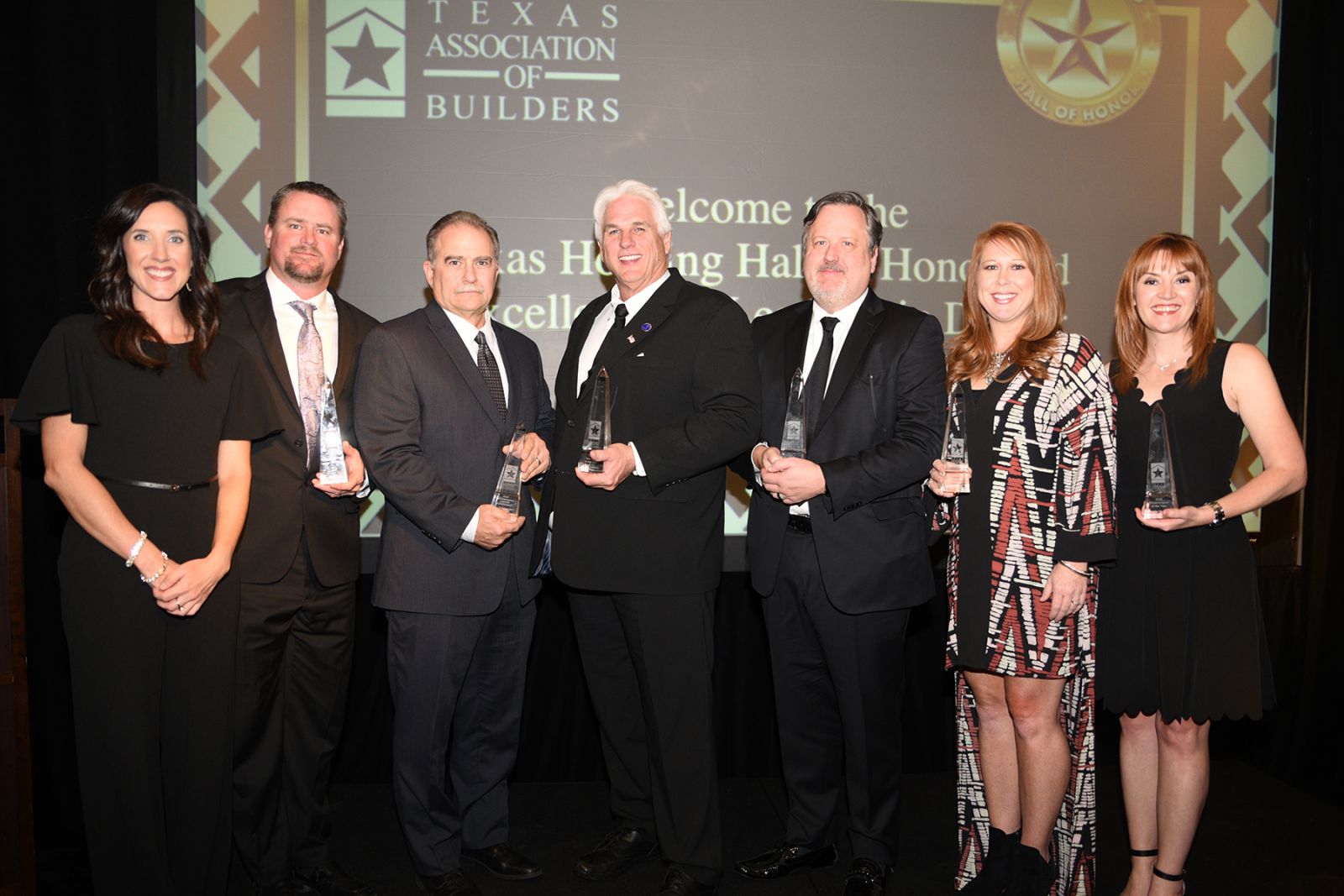 J.B. SANDLIN BUILDER OF THE YEAR: Erin Wright, Wright-Built, LLC – Hawkins, Texas
Erin is a one of-a-kind builder that is known for distinct craftsmanship and producing quality-built homes in the Hawkins, Texas area. She holds certifications as an Aging in Place Specialist, Green Professional, Graduate Builder and Graduate Master Builder. Her work has received “The Best of Houzz” badge in Design and Service. She is equally dedicated to National Association of Home Builders (NAHB), Texas Association of Builders (TAB) and the Tyler Area BA. At NAHB, she is a member of the Young Professionals Council as well as the Professional Women in Building Council. Erin has served on TAB’s Executive, Membership, Sunbelt Builders Show™ and HOMEPAC Committees plus the Young Professionals Council.  In 2018, as president of the YP Council, she led an initiative to launch a new Sunbelt event, The Builders Bash. It was attended by over 400 people and proceeds from the concert raised $35,000 for the Texas Builders Foundation. Erin served as president of the Tyler Area Builders Association in 2017 and also was chair of the Membership Committee and the Parade of Homes. Following Hurricane Harvey, she launched a drive to collect hurricane relief supplies for victims. As a result, two trailers of supplies were delivered to the HBA of Southeast Texas and the Crossroads BA.  Additionally, monetary donations were made to the Coastal Bend HBA and the Greater Houston BA.

TED SCHLOSSMAN LIFETIME ACHIEVEMENT AWARD: Ron Rohrbacher, Perry Homes – Houston, Texas
Ron Rohrbacher has served his local, state and national associations for decades. He is a member of the Greater Houston BA’s Board of Directors and has served as TAB’s Codes & Standards Chairman for over 20 years. In that capacity, he worked with TAB and the Environmental Protection Agency Region 6 and the Texas Commission on Environmental Quality to develop a stormwater training program that culminated in a signed proclamation by all three organizations. He was also instrumental in developing with OSHA Region 6, TAB’s OSHA Model Safety Plan. Both of these initiatives have saved our builder members potentially hundreds of thousands of dollars in fines. At TAB and NAHB, he has served on numerous task forces and committees to ensure effective and reasonable enforcement and compliance with building codes and other construction standards.  Ron makes himself available for TAB regulatory and legislative efforts, testifying at legislative hearings and meeting with state regulatory staff and leaders on a regular basis. For years, he has worked with community colleges in the greater Houston area on workforce development training. He is hard at work to bring construction trades programs into the Houston Community College System, the largest community college system in the state. These efforts include raising significant dollars to provide scholarships, equipment and materials to help get these programs started.

PHILANTHROPIST OF THE YEAR: Greater Houston Builders Association
In August 2017, the gulf coast of Texas suffered the worst flooding on record from Hurricane Harvey. The Greater Houston Builders Association led their city and community through this difficult time with compassion, generosity and humanitarianism. GHBA was recognized for its membership education and advocacy efforts, including GHBA’s support of Harris County’s $2.5 billion flood mitigation bond package, and charitable outreach, specifically, the creation of BuildAid in partnership with HomeAid Houston and the David Weekley Foundation. BuildAid has received $5.5 million from the Hurricane Harvey Relief Fund established by Houston Mayor Sylvester Turner and Judge Ed Emmett and $350,000 from the ReBuild Texas Fund. To date, within the BuildAid program, 15 homes have been completed; 55 homes have completed the application process and will soon begin construction; and 31 are in mid-construction. The goal is to complete a total of 250 homes in the next 18 to 24 months. GHBA also successfully advocated for the largest bond package for flood control in Harris County’s history and kick-started one of the most responsive recovery-related charities in the region. GHBA’s leadership in Harris Plus, Houston Stronger, Fight Flooding PAC fundraising and the association’s efforts in educating members about the bond package, GHBA spearheaded advocacy efforts beginning in September 2017 that ultimately resulted in a $2.5 billion infrastructure bond package passing with over 85 percent voter approval. The Fight Flooding PAC held two press conferences, produced 742 radio and TV ads, distributed 4,000 yard signs, and 5,000 push cards and completed robo calls. The PAC also disseminated door hangers and circulated social media posts resulting in over 175,000 digital views. The association was also heavily involved at the grassroots level, advocating for greater infrastructure investment. TAB’s Philanthropist of the Year has traditionally been awarded to an individual, but the committee chose to recognize the entire GHBA for its rebuilding, advocacy, charitable and educational efforts in the aftermath of Hurricane Harvey.


DEVELOPER OF THE YEAR: Gene Lantrip, Lantrip's Custom Homes – Abilene, Texas
For 35 years, Gene Lantrip has built homes and developed subdivisions in the Abilene community. Gene has numerous accolades to tout but most impressively is that he’s a TAB Life Director and has served on the Executive Committee for the past five years. He’s currently chairman of the HOMEPAC Trustees, where he has already exceeded his goal of raising $235,000. Gene has also chaired the Area Vice Presidents Committee and is a Capitol Club Donor to HOMEPAC. In addition, he’s active on the Membership, Government Relations and Bylaws and Policy Review Committees. He has served as president of the Big Country Home Builders Association (BCHBA) and has earned a BCHBA Builder of the Year honor.

ASSOCIATE OF THE YEAR: Bob Burton, Winstead PC – Austin, Texas
Bob Burton has become a very valuable asset to the Texas Association of Builders. Since getting involved with TAB, his expertise on a number of issues related to land development, homeowner associations (HOA), tort reform and construction law has been critical. Burton is regularly called upon as an expert witness and to offer professional insight into potential legislation and regulation. He has served for years on the TAB Attorney Council and HOA Task Force, contributing hundreds of hours to the association. His efforts as one of our lead legal and technical experts directly led to the successful passage of the Condo Tort Reform Bill in 2015. Following the success of this legislative advocacy effort, Burton was instrumental in furthering the formation of TAB’s Developers Council and the recruitment of new developer members for the association. Through those efforts, TAB has extended its presence with developers across the state. Recently, Burton was appointed to chair the TAB Homeowners Association Issues Task Force for the upcoming Legislative Session.

ASSOCIATION ACCOMPLISHMENT OF THE YEAR: Big Country Home Builders Association
The Big Country Home Builders Association (BCHBA) saw a lot of change in 2018. BCHBA thoroughly evaluated their organization and strategically developed a path to grow all aspects of their association. This past year, their membership grew by over 40 percent, revenue increased by 30 percent and they have exceeded their HOMEPAC goal by an unbelievable 500 percent. BCHBA reinvested over $25,000 back into their community through their local school districts, fire deparments and Habitat for Humanity. Additionally, the Big Country HBA was able to secure a position on the Abilene Chamber of Commerce board.  This appointment has proven to be very beneficial to stay current with city administration, build relationships with city officials, and foster relationships that were previously non-existent.  These connections have led to several new workforce development programs.